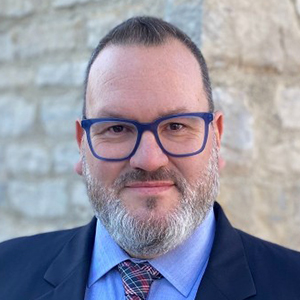 Since attending Bank Street, I say this all the time: ‘Do what you love, but find a way to make your job your calling in the world.’ That’s what Bank Street’s leadership program helped me figure out—and it’s what makes it an unusual program in the field.

When Ben Garcia, GSE ’08, received his Leadership in Museum Education master’s degree from Bank Street, he could not have imagined that he would one day become a leader in the advocacy of queer rights as the first executive director of the newly created American LGBTQ+ Museum in New York City.

“Working on behalf of the liberation of LGBTQ+ people was such an unexpected path for me. The museum and the role I have now didn’t even exist when I started in the field, but now I have this role where I’m a full-time advocate for a cause that is deeply meaningful to me,” Ben said.

Earlier in his career, Ben also worked as deputy executive director and chief learning officer at Ohio History Connection, deputy director at the Museum of Us in San Diego, CA, as well as the head of interpretation and operations at the Phoebe A. Hearst Museum of Anthropology in Berkeley, CA. Ben came to Bank Street with a love for museums and professional experience working as a museum educator, but it was his graduate work that enabled him to look deeper into what he eventually wanted to achieve in his career—to lead a museum from its inception.

In early 2022, Ben was hired as executive director at the American LGBTQ+ Museum in its incubation stage, where he’s currently designing the space the museum will share with The New-York Historical Society on Central Park West in anticipation of its opening in 2026.

He said, “I’ve worked in a few museums that already had a long history where it was my role to help them shift their culture to become more inclusive. But now, with this new opportunity, I am leading a team that is building that inclusiveness from the beginning. Studying at Bank Street taught me that I needed to focus my work on the things in the world I care about the most.”

In his new role, Ben is also busy planning educational programs for the public, producing pop-up exhibitions, leading fundraising initiatives, and hiring staff to assist the museum with the goal of ensuring the history of LGBTQ+ people and their underrepresented stories get told.

“Our museum is going to be an activist museum working to ensure that the liberties of all, including queer, black, and brown rights and woman rights, are protected. Now is the time for museums to embrace this work. Just this year, over 200 bills were introduced in state legislatures that attacked the rights of LGBTQ+ people, reproductive rights, and the rights of educators to teach truthful histories,” Ben said. “We will make sure we’re addressing the full diversity of this community, centering the stories of black, brown, transgender and gender non-conforming members of the LGBTQ+ community, so everyone has a place to go to commemorate those who have gone before us.”

One thing this outspoken museum leader carries forward from his Bank Street education is the power of introspection.

Ben said, “I would encourage anyone to think about why they’re doing what they’re doing and the impact they’re hoping to have in the world. If you start with these two critical questions, you’ll find yourself working with purpose, with vision. As a grad student, my Bank Street advisor, Claudine Brown, had us do an exercise to pick our top 10 topics to care about in the world, then narrow it down to three. We were taught that if your job isn’t focused on one or all of those things, then your work may not be satisfying to you. Since attending Bank Street, I say this all the time: ‘Do what you love, but find a way to make your job your calling in the world.’ That’s what Bank Street’s leadership program helped me figure out—and it’s what makes it an unusual program in the field.”