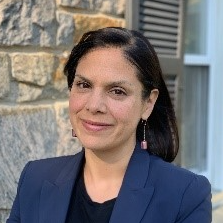 When I started at Bank Street, I already knew the value of supporting strengths-based, learner-centered, and equitable education practices to help influence positive learning outcomes for all students and educators. What I added from the Bank Street approach was ensuring that learning is experiential—and that's what I’ve always believed in as a human being, a sibling, and a child of immigrants. If we meet folks where they are and give them the opportunity to learn hands on, that’s how everyone learns and grows.

Carolyne Quintana was a 9th grade English Language Arts (ELA) teacher in the Bronx when she decided to attend Bank Street for a master’s degree in educational leadership. She wanted the next step in her career to include finding new ways to support the professional development of other educators. Now, as the deputy chancellor of teaching and learning opportunities at the New York City Department of Education, she has been tasked with reimagining how students learn literacy and the language arts across the nation’s largest public school system.

“In my office right now, we’re looking at how to support reading with a number of evidence-based strategies and resources, including AI, artificial intelligence. Each one of us on the team has met with experts, and we’re training to make sure we’re building systems that work for both our teachers and our students. Part of this project is about taking the risks needed to move our schools forward, and that is an important part of anyone’s journey,” Carolyne said.

Carolyne began as the K-12 district coordinator of literacy programs for the White Plains City School District before she became school principal and helped rebuild Bronxdale High School in the Bronx. As her leadership career grew, she served as a new principal support coach who helped build new school leaders across New York City before she became the executive director of Affinity Group Schools, where she led the citywide office, created resources and practices to better prepare students for high school graduation and college, and developed leaders across a network of more than 100 New York City schools.

But there was one move in particular that she credits the most for her recent launch by newly appointed chancellor, David C. Banks into her role as deputy chancellor—taking the risk to move into research by becoming the senior director of social, emotional, and academic development at the Institute for Student Achievement.

“Leading the Affinity Group Schools was great work with a fantastic team. My role was to help them develop so they’d feel more confident and competent, but when COVID-19 hit, the program was dismantled, and I decided to move to a non-profit called the Institute for Student Achievement. There, I led the social, emotional, and academic work and worked with some smart people under a grant from the Carnegie Foundation. It was the chance to dig into the research. I took a risk and was able to rekindle relationships that connected me to the new chancellor’s transition team. It refocused me on literacy, social-emotional development, and the value of working with the community and parents—all of the pieces made me prepared for my present role.”

Along her professional journey, Carolyne has constantly reached back to utilize what she learned as a graduate student, where she realized that Bank Street’s developmental-interaction approach—which recognizes that all individuals learn best when they are actively engaged with materials, ideas, and people, and that authentic growth requires diverse and nurturing opportunities for ongoing social, emotional, and cognitive development—mirrored her personal ideology about educational growth.

Carolyne said, “When I started at Bank Street, I already knew the value of supporting strengths-based, learner-centered, and equitable education practices to help influence positive learning outcomes for all students and educators. What I added from the Bank Street approach was ensuring that learning is experiential—and that’s what I’ve always believed in as a human being, a sibling, and a child of immigrants. If we meet folks where they are and give them the opportunity to learn hands on, that’s how everyone learns and grows.”

Carolyne believes that building relationships has also helped her to achieve her goals. An important highlight for Carolyne was being recognized by Bank Street’s Alumni Association (BSCAA) for her continued efforts to implement an inquiry-based approach to teaching and learning. While dedicating time and resources to teaching staff and students useful, research-based strategies to build a trusting, loving community, she has committed to the growth of both adults and young people alike.

Carolyne said, “Being recognized by my peers and by the institution that I respect so much is very important. The COVID-19 pandemic was hard for so many, and the award from Bank Street reminded me to feel that spark and to feel the opportunity to shine. As a coach, it’s always about standing shoulder to shoulder—and to be nominated by peers shows that we build each other up.”

For educators who are considering following paths toward educational leadership, Carolyne is quick to suggest Bank Street College as an option, but the coach in her also recommends self-reflection when making the decision to seek an advanced degree in education.

She advises, “Make sure that you know what kind of learner you are and why you are furthering your education. If you believe that meeting children where they are, learning through play, and if  the other tenets you believe in align, then choose Bank Street College. Attend one of their events. They always have talks, and when you do, you’ll know that it is the right place for you.”