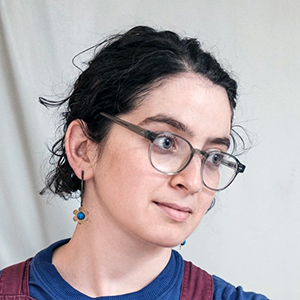 What I do now as a public school teacher comes very naturally from the studies I did at Bank Street. We use culturally responsive, place-based learning that includes investigations of the neighborhood and our school, reflecting and responding to the community.

After growing up in Brooklyn, Esther Gottesman wanted to stay connected to her community by becoming a public school teacher. She’s currently a fourth-grade Integrative Collaborative Teaching (ICT) special education teacher at Arts & Letters 305 United, a pre-K-8 school in Bedford-Stuyvesant. After her undergraduate studies, she was an environmental educator for a few years before attending graduate school at Bank Street, where she strengthened her classroom teaching.

Esther says, “Bank Street’s philosophy and pedagogy—I feel like that is just good teaching. It’s thinking about individual strengths and needs. It’s a model for responding to people as individuals and thinking about what students need and how to set things up for students to be successful. At Bank Street, I felt really nurtured by professors who saw the things I was interested in, challenged me, and helped me grow. They forwarded information to me that was grounding and helpful. I knew that I could call on them, and that was a really important educational experience.”

Before Bank Street, Esther was a school garden teacher at PS 216 with Edible Schoolyard NYC.

“As a school garden teacher, I had the opportunity to teach in a hands-on, inquisitive way that at first didn’t always feel possible in a more traditional classroom environment. I was curious to see if I could continue that kind of inquiry and bring joy to kids as they learned academic concepts and tried them out in a huge garden. For example, I taught sensory poetry in the herb and flower gardens. And we also learned about the Dust Bowl and soil erosion and how planting cover crops would prevent it. In that job, I worked with many other teachers and saw up close the power of really good teaching and learned how to make kids feel interested and connected to each other and the world. I was inspired! I did that for six years, and I also managed gardening and food systems programs at other schools. I still do a lot of that work today. It’s a big part of my values,” she recalls.

Now at Arts & Letters 305 United, Esther is one of two educators in her classroom, where she teaches a combination of students, some with diagnosed learning disabilities and some without.

“My role really resonates with my values about what public school should look like. What I do now as a public school teacher comes very naturally from the studies I did at Bank Street. We use culturally responsive, place-based learning that includes investigations of the neighborhood and our school, reflecting and responding to the community. I really love public schools and the students I teach,” she says. “My school is very outspoken about intentional integration, in our school and district. We encourage talk about anti-bias work with kids, including issues of justice, race and gender, and Black Lives Matter.”

Esther’s school utilizes New York City District 13’s new culturally responsive and sustaining learning component and is one of the partners for Bank Street’s two-year District 13 Residency in Childhood General and Special Education program. Through the program, first-year students at Bank Street participate in a full-time paid residency in a Brooklyn public school and, in the second year, residents are eligible to be hired as a full-time teacher. Additionally, all cohort members receive a scholarship that reduces tuition by over 50 percent, along with a $20,000 stipend.

While Esther now works as a public school educator, she also gained experience in independent school education during her supervised fieldwork as an assistant teacher at the Bank Street School for Children in the 7/8s and 8/9s classrooms.

“At the School for Children, I saw some exemplary teaching and I was able to feel out the things I wanted to practice. One challenge that I knew from Bank Street was about finding ways to transfer Bank Street’s best practices to a public school setting. For example, in public schools, there is a much larger student-to-teacher ratio and there can be fewer resources. Another thing I struggled with was how people talked about public education as a deficit model. Obviously, private schools have better resources, but public schools are rich, diverse, community spaces.”

When Esther realized that she was not the only graduate student who planned to work in public schools, she and other interested classmates formed a social cohort that placed the focus on public school education.

“My love for the grad school is very deep, and the cohort was really important for me. Things would be presented that were not perfect for a public school, so we would ask what can this look like? That was something to grapple with and find solutions, which we did—together,” she said.