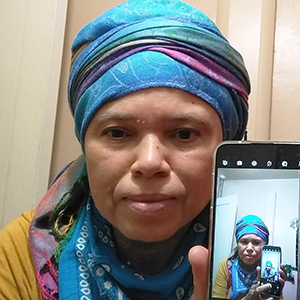 My greatest honor was when a 13-year-old African American boy brought his mom to see my solo exhibition. He had to meet me. We had a conversation during which he revealed he had artistic ambition. I encouraged him to follow his dreams.

Before native New Yorker Laura Anne Walker graduated from Bank Street in 1986 with a master’s degree in Early Childhood General Education, she had taught preschoolers and summer day camp for a decade—all while pursuing her dream and becoming a successful professional artist.

As an undergraduate, Laura Anne started out as a premedical major before her life took a strange turn: a mysterious and debilitating illness that changed how she was looking at her life and helped her to understand the importance of pursuing her dream of becoming a professional artist. Laura Anne dedicated herself to her artistic goals and found great success. She says,  “I’ve sold paintings to Kim Cattrall of Sex and the City, who I met at the Outsider Art Fair in Chelsea; to the real Dr. Patch Adams who Robin Williams played in the movie Patch Adams; to a collector who came from San Francisco to New York three years in a row for my paintings; to Hartford Hospital; and to many others who are not famous names.”

At the same time, she was also teaching in New York City. “I loved the first nearly 10 years I taught pre-K and directed summer day camps for the NYC Department of Parks and Recreation, which was the most enjoyable job ever.”

With her next decision to pursue her master’s degree at Bank Street, not only did she grow as a teacher, but her studies also had a positive impact on her art. “I was still thinking that art had to be like Rembrandt, etc. Now I appreciate the way I draw and paint. It’s kind of childlike, kind of playful, kind of a fantasy world.”  She credits Bank Street’s approach to teaching and learning  for helping to bring out the whimsical thought process mimicked by her art. “My Bank Street classmates were sharing play-doh recipes on the first day. There were hugs. The instructors actually freely gave information.”  As an artist, Laura Anne believes her paintings and drawings relate to her teaching. “I don’t necessarily paint many classroom scenes, but it’s all there in the rhyming, the cats, the playfulness, and the patterns.”

Laura Anne, who has taught for a total of 18 years in various settings, and even briefly at the college level, makes use of her own story to empower her students, meeting them where they are on their path toward actualizing their ambitions. She says, “My greatest honor was when a 13-year-old African American boy brought his mom to see my solo exhibition. He had to meet me. We had a conversation during which he revealed he had artistic ambition. I encouraged him to follow his dreams.”

Here are a few samples of Laura Anne Walker’s artwork. 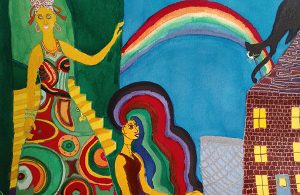 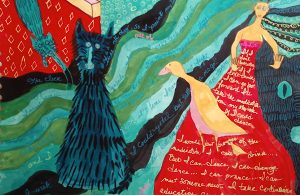 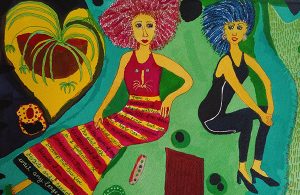