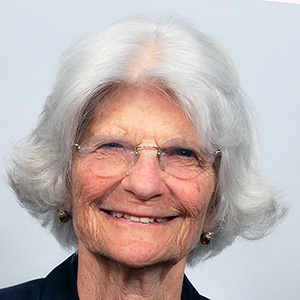 I thought I would be helpful in developing early childhood education. That’s where I thought I could make a good contribution because I had witnessed the Bank Street model. I had not had a connection to sex education—I just thought that I could be useful.

While at Bank Street, Susie earned a Master of Science in Education degree in the Cary Leadership Program (presently the Progressive Leadership Program). She chose this program to move into educational leadership where she could help train prospective principals for elementary schools in urban settings. A former education reporter for Life Magazine, Susie was already well-versed about the field, but she credits Bank Street’s whole child approach for her early success.

She reflected fondly on the early childhood teaching tools Bank Street prepared her with, saying, “It was about child development, not just the academic. I remember doing fieldwork  in the School for Children and the authority we gave to kids. We weren’t just teaching these kids. We were finding out what they thought, following their progress.”

After she graduated from Bank Street, Susie started serving on the New Jersey Board of Education in 1978. This appointment was beyond what she thought her role would be as an elementary school principal. Pivoting into her new leadership role on the board was challenging. “I thought I would be helpful in developing early childhood education. That’s where I thought I could make a good contribution because I had witnessed the Bank Street model. I had not had a connection to sex education—I just thought that I could be useful.” she recalled.

It was no surprise to Susie that Bank Street had readied her for this new opportunity. She took what she had learned and started applying it to the creation of the new and controversial sex education curriculum. Her subcommittee, called Family Life Education, asked for a radical cultural change. The ideas were opposed by many. Twice, opponents to the State Board policy took the controversial case to the Supreme Court and to the New Jersey Supreme Court to stop the board from making headway, but this didn’t stop Susie from continuing her mission to educate young people about preventing pregnancies and sexually transmitted diseases.

Susie said, “We’ve come a long way. New Jersey was the second state to require Family Life Education. Since then, there are now 22 states that require this curriculum.”

Susie then worked for 20 years as Executive Coordinator for Answer: Sex Ed, Honestly, a groundbreaking national organization that provides and promotes unfettered access to comprehensive education about sexuality for young people and the adults who teach them. She helped the program expand comprehensive sex education in public schools and community settings. Because Susie had learned at Bank Street that children learn best when engaged in ways that match their individual needs, she knew she wanted to allow the students “to help show adults the way,” so she implemented a newsletter written by teens/for teens to involve young people in leadership opportunities. “All these things had crystalized at Bank Street for me,” she said.

Now retired, her career that began with giving students access to sex education in public schools has become a lifetime of meaningful civic actions. “I don’t think I would have done my work in sex education if it hadn’t been for my graduate work at Bank Street, and I would like to give credit where it is due.”

At the age of 91, Susie is the author of the memoir, Still Running, a reflective history that chronicles the highlights of teachable moments as a sex education advocate, running her first marathon at the age of 67 (she’s still running 3.1 miles and  5Ks),  as well as the friendship she shared with former first lady, Jacqueline Kennedy.

Throughout her incredible career, Susie has remained connected to the Bank Street community, mentoring and sharing her experiences.