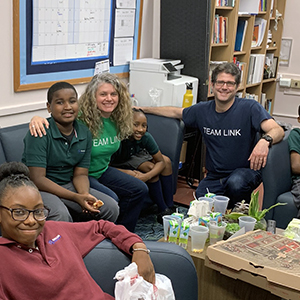 We value the way that Bank Street trained us to always look through the lens of the child and to make sure the child is the center. 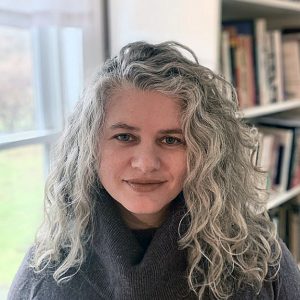 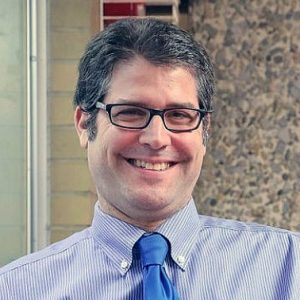 New York City charter school co-founders Steve Evangelista, GSE ’01, and Margaret Ryan, GSE ’01 met while studying at Bank Street. Margaret was in her third year of teaching at an elementary school in the South Bronx and Steve was a second-year teacher at an elementary school in Harlem. For the pair, who’ve been married since 2005, the details of their first encounter are a topic of loving dispute: Steve thinks they met at Margaret’s apartment as she hosted a group of first-year Teach for America Corps members while Margaret recalls meeting Steve over a cheese plate at a Bank Street event. How they came together may be a bit murky today, but what seems clear is the love they share—for each other, for their two young daughters, and for the current students and thousands of alumni they refer to as their extended family at Harlem Link Charter School, the public charter pre-K to fifth-grade school they co-founded.

All that they do at Harlem Link is based on Bank Street’s child-centered progressive education model and their desire to provide the community with access to active and collaborative learning.

Steve said, “We started the school by talking to the students about what they want out of life, and we got to know people personally. Maybe it’s trite, but we said, ‘We care about you—the same way you would say that to your family. It is about love and care.”

It’s no wonder Steve and Margaret hold on tightly to the relationships they have built and the many cherished connections they’ve curated over nearly two decades of running the school together.

“The lines have become so blurred. We have relationships going up to 20 years with 566 alums. They come back for panel discussions and graduations. We write Fulbright Scholarship recommendations for them. They come back to us like family,” Margaret said.

Much like in most marriages, the journey to keep the school running and successfully providing a high-quality progressive educational experience for the community has had its ups and downs.

“A start-up is a series of unexpected crises,” Steve said. “In the beginning, there were 10 of us. Ten teachers with 100 kids. And we had to make everything up as we went along. As the years went by, the school grew. We added new phases of growth based on the school’s needs, and we went from being a small group to being full-sized with 300 kids. There was a lot of success with fundraising, media attention, and feedback from families.”

With the birth of their first child, the co-directing couple made an executive decision for Margaret to step down and work part time.

“We did a better job of separating our personal life in 2010. Margaret took a back seat to raise the family. It was a loss to the school but important for our family,” Steve said.

Margaret doesn’t see her pivot as a loss, but compares it to how many working mothers search for a healthy work-life balance. She is especially proud of the time she took to incorporate Emotional Responsive Practice, led by Bank Street’s director of the Center for Emotionally Responsive Practice, Lesley Koplow, GSE  ’79, into Harlem Link’s pedagogy.

“A big reason I took a step back was an equal love for both family and our school. If I had stayed in the original position, something would have had to give and we didn’t want that. Stepping down enabled me to both focus on our family and also do deep dives that were crucial to mission and vision. But when I did step down, I was able to zero in on several aspects of the academic and social emotional programs we needed to advance. Common Core was one thing I worked on to help the school change over to those standards, and I was able to lead where I wouldn’t have had the time and space to otherwise. That included student support for special populations of first-time English learners, and I built a school-based social work team so our teachers, co-teachers, and social workers could have space to reflect more on the groundwork.”

Steve said, “We had drifted from the mission in 2014, and we realized we had lost some of our practices like using play. Margaret also helped lead an exploration and definition of what play is in the classroom. Now, the work of play seven years later is in all facets. It has positively affected the school and we have a highly qualified team committed to the school’s vision to take it even farther.”

Margaret said, “In the last few years, I’ve been 100-percent full time. Now we have closer to 500 kids, 50 faculty members, and well over 100 staff—much larger than the 10 people we started with. Some of the school’s features that we worked on together over the last 18 years  include the Start to Finish Program, which is getting literacy and support to the mothers and babies of the Harlem community. We also help Harlem Link’s students with middle school placement and beyond, including a robust Alumni support program. That includes mentors who help students with middle school placement for DOE, charter, and independent schools, editing applications and preparing for interviews. Harlem Link is also in its sixth year of diversity, equity, and Inclusion work with a Diversity and Social Justice Committee leading initiatives, such as Racial Affinity Groups, a DEI Curriculum Committee, and anti-bias sessions from coaches.”

Another expansion that both of these early childhood and elementary education majors boast about like proud parents often do was the opening of the pre-K program at Harlem Link. Steve and Margaret enrolled their own children in the school and continue working to improve the student experience now that they have a first-hand view through their children.

Steve said, “I really have to say that this is a school I can definitely stand behind. Our oldest daughter just graduated fifth grade and the younger one is in first grade at Harlem Link.  With Margaret there, it has felt more organized than it has been in past years. Things are always better when she and I are able to collaborate.”

Throughout the years, Bank Street has continued to play an important role in the couple’s lives. Margaret has served as vice president for the Bank Street College Alumni Association since 2017.

Margaret said, “We have supported several members of our school community to go through the Progressive Leadership Program at Bank Street, creating a pipeline at Harlem Link of Bank Street leaders. We value the way that Bank Street trained us to always look through the lens of the child and to make sure the child is the center.”