Experiencing ‘the ABCs of it’ with Leonard S. Marcus, Curator

This week, instead of our usual Wednesday gathering, my fieldwork conference group and I met at the New York Public Library in Bryant Park. I assumed we would be viewing an exhibit on the important aspects of children’s literature then discussing what about those books made them appropriate for literacy work. I didn’t realize what an evening this would turn into. Thanks to the efforts of the Reading & Literacy department (Mollie Welsh Kruger, Helen Freidus, Lynne Einbender and Susan Goetz-Haver), we were given a tour by curator Leonard Marcus.

The exhibit was phenomenal. Rather than offering a collection of linear artifacts, it provided an experience for the viewer both visually and tangibly. As you walk in, there is a large visual representation of an early text, Songs of Innocence, by William Blake. The actual book, with its extremely tiny print, is presented inside of it’s larger representation. Visually, it is engaging and thought-provoking. I stood back and then stood closely, pondering the relationship of text, sizing, meaning, and text-as-art. Throughout the exhibit there are books to read, touch, listen to, as well as recreations of classic children’s stories to sit in. One pillar within the space, for example, could have been a pleasant white bench but is instead shaped and textured like an arched hedge, with a copy of Frances Hodgson Burnett’s The Secret Garden available to read.

We learned how many of the earliest books geared to children were meant to offer salvation for their sinful souls. While my initial reaction was to feel that the children who endured these books were in a way oppressed, Leonard countered my assumption with the point that the practice arose from people with admirable intentions (like minister Cotton Mather, who wanted to save children from sin). I immediately thought of all the reasons we want children to read certain texts today. While they were worried about sin and salvation, we worry about recall and comprehension, or instructional level and decoding. Hundreds of years from now, will someone in a similar exhibit looking at leveled readers and running records be wide-eyed and aghast at the thought of the children that had to endure such hardships? Hopefully someone like Leonard will be there to tell them that we had admirable intentions, too.

Speaking of admirable intentions, students at Bank Street would be very interested in the display about Jean-Jacques Rousseau and John Locke. Rousseau advocated that children under the age of 12 should focus on learning from “the book of Nature,” by which he meant their experiences. He even goes so far as to say that children should not be reading anything until age 12, which he describes as the age of Reason. While we at Bank Street certainly value Piaget’s teaching philosophy with it’s focus on experience, would a teacher these days really go so far as to advocate NO reading until age 12? Learning by natural consequence is an interesting concept, and like educators before him it was born of good intent.

Another part of the exhibit was called “Lights out – Reading Under the Covers,” and was centered around what Leonard described as “literature that children embraced but critics disapproved of.” In the display was one of his own copies of MAD magazine from when he was a child. Another favorite of mine was a pageless 2011 book by Joydeb and Moyna Chitrakar called Tsunami. To be fair it had ONE page, which unfolded like a scroll, but it was unexpectedly fresh in a room full of bound books. To me, the unraveling of this page, with a river of debris expanding to include homes and people, evoked the very nature of the 2004 tsunami. The characters’ faces are drawn with little affect in the Patua art style. Didn’t the illustrators consider this? My feeling was that we often forget how helpless we are to nature’s forces. Perhaps they were honoring the dead by showing their last moments as part of nature’s cycle, and not as terrified humans facing demise.

The exhibit is so experiential that I do not want to spoil too much of it, though I’d like to write about it for hours. Just to list a few more highlights before I stop, there is a collection of Nathaniel Hawthorne’s original copies of Mother Goose which he read to his children. You can see in them some edits the family made to what they must have considered risque rhymes. A favorite of mine was how his wife Sophia cleverly changed “…the cobbler did swear” into something more wholesome which still rhymed (you’ll have to pay a visit to find out). 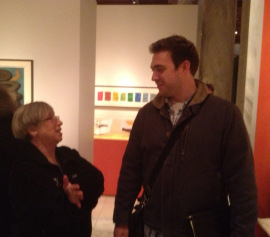 By chance, our tour group was joined by Bank Street Alumna and Children’s author Robie Harris. I was introduced and chatted with her by happenstance just outside of the Censorship section of the exhibit. Robie is part of an upcoming discussion on censorship with Leonard and others on February 1st. More info on that event here.

The exhibit runs until March 23, 2014. Leonard told me he hopes that parts of the exhibit may become permanent – however – I strongly encourage any educator (or reader for that matter) to get there and see it in it’s entirety.

Note: A big thank you to Mollie Kruger Welsh for the photo and clarifications on a few names and dates.