Reflecting on Autumn – Learning the Season

“CI-NNA-MON!” the class yelled the syllables in a boisterous, clamoring, almost-unison that reverberated enthusiasm through the room. Yes— what they’d just smelled is cinnamon— and nutmeg, cloves, allspice and ginger, ground and mixed together to form a spice that is uniquely autumn. I had just introduced them to some essential ingredients in an autumn harvest fruit salad they’d be putting together throughout the day. Cooking is always a wonderful way to convey feelings— in this instance, these spices intended to impart the feeling of cozy warmth autumn beckons. The children agreed, that the spices were indeed— “spicy,” “warm,” and (my favorite interpretation) “tickling.” Just what we needed to herald the season and settle into the cool notes of autumn.

Although we cook year-round, making warm, spiced, comforting foods through the autumn and winter seasons lend well to bolstering a sense of cozy togetherness within our classroom community. 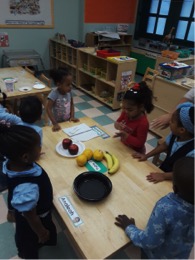 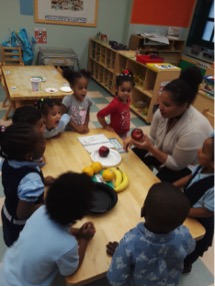 Who says there aren’t many trees in the city? A walk along the Highbridge proved otherwise as bursts of fall colors sketched the surrounding area in burnished ambers, deep greens, ochres, and chestnut. Here, we braved the cooling winds standing on the bridge, watching boats float idly by upon the East River. It was a wonderful lesson in science— why do leaves change colors? Why does the temperature change? We followed up with experiments— will a green leaf change to different colors in our classroom, or must it be on the tree? 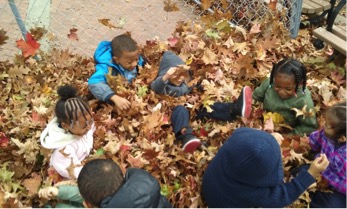 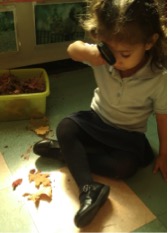 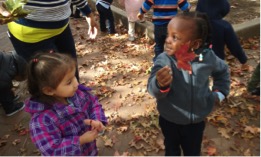 We went apple and pumpkin picking

Every year, biting into fresh, crisp apples at Masker Orchards in Warwick is a tradition. The bus ride is long, but the views up winding roads to get there and the simple quietness that comes from being away from the city are incomparable. From all the apples we bring back, lots of apple cooking ensued. 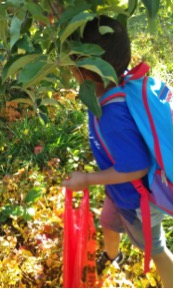 Cooler weather means heavier clothing to keep warm. But different clothes often come with challenges for little ones. We worked on putting our arms through longer sleeves like those on fuzzy sweaters, and fasteners such as zippers on jackets. We also started practicing putting on socks, boots and outerwear accessories like gloves and scarves. 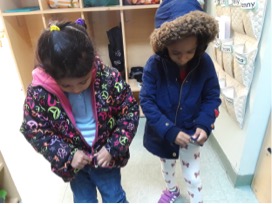 We trick or treat and eat lots of candy 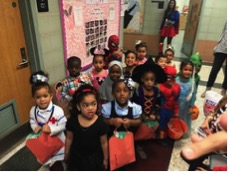 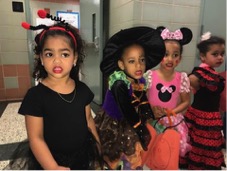 When Halloween rolled around, we trick-or-treated through the halls as our school became a parade of costumes— the day was filled with sugar-rush induced excitement.

As we said goodbye to autumn and hello to this swift-arrived winter, we’ve reflected upon the details of the past season and are excited to explore the new. 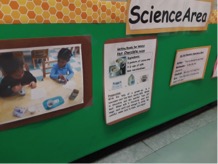